Annually in May, The Pest Posse recognizes the veterans of our nation who work in the pest control industry with our very own U.S. Armed Forces in Pest Control.

Why was the month of May chosen for this series?

Military Appreciation Month was officially designated by Congress in 1999 and takes place in May each year. Every year, the president issues an annual proclamation reminding Americans to celebrate this patriotic month that pays tribute to those who have sacrificed so much for our freedom. 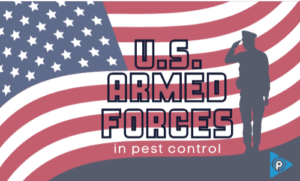 With the sponsorship of Catchmaster, The Pest Posse will be releasing the second annual U.S. Armed Forces in Pest Control recognition series.

The series started on May 2, 2022, with a Facebook and LinkedIn live stream with guests Jonathan Frisch, Dr. Stan Cope, and Liz Turner discussing the Catchmaster history and why they support our veterans. Then every Monday throughout May, a new recognition interview will be released. These interviews will be available as part of the free Pest Posse TV membership and available on all major podcast platforms.