The Silverfish got its name because of its silvery, metallic appearance and fish-like shape and movements. 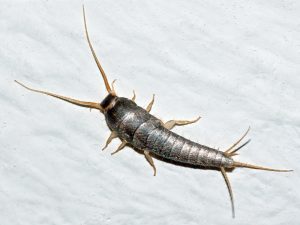 This insect is also known as “bristletails” because of its three long, bristle-like, or tail-like appendages on the rear end of its body. Adult silverfish have a body length of about 1/2 - 3/4” not including the tail. They have a flattened body, and their shape is often compared to a teardrop, carrot, or fish, tapering from head to rear and generally covered with scales. A female silverfish can produce eggs every day for the rest of her life which is about three years. But if conditions are right, they may live up to eight years. Silverfish will typically lay their eggs in protected areas, such as crevices, cracks, and under carpeting or rugs.

Silverfish can be found in those moist, humid areas of the home, such as bathrooms, basements, and attics. They are elusive insects that will hide from humans, which means the damage they caused could go unnoticed.

Did you know that silverfish are the most ancient insects on the planet, predating even dinosaurs by 100 million years! This means that they have been crawling around for more than 400 million years! So why have they survived all those years? They have developed extreme speed that helps them dart for cover when predators are around, or they feel threatened.

The diet of the silverfish consists mainly of paper, glue, shaving cream, and other starchy substances like toothpaste, pasta, fabric, and cardboard. And they can live up to a year without food!

Because silverfish have been around for so long, they have developed resistance to many insecticides. Removing moisture, food, and hiding places that allow silverfish to thrive is the best control method. Using dust materials in cracks, crevices, and wall voids will work however they work best if they can contact the silverfish directly. A material called Doxem Precise by CSI is a dry flowable bait formulation that has shown some great results in controlling silverfish.